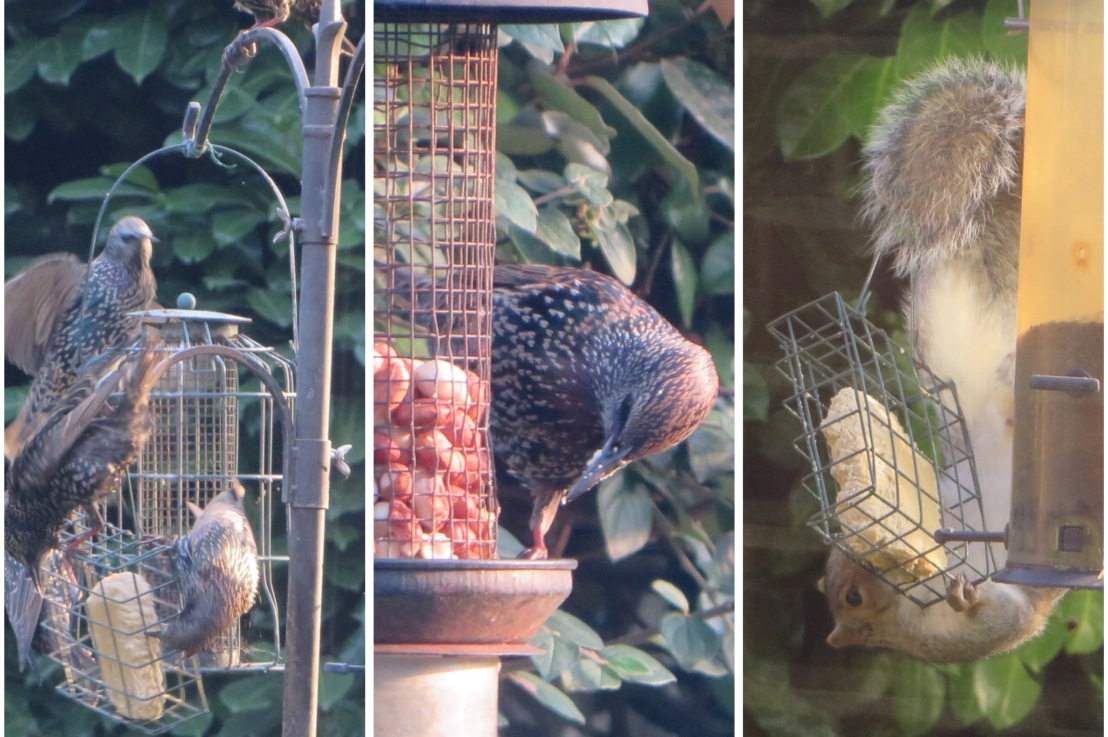 We’re back in England at Tim and Ruth’s place, it’s 11am and there’s a party going on in the backyard.

Right now there are about 20 starlings, a couple of pigeons and two squirrels – in the bird bath, balanced on the feeders, fighting each other on the grass. One squirrel is hanging from the fat block by one leg, back legs stretched apart as far as they’ll go, guzzling fat as though he’s been deprived of food since last autumn.

We invited them all to the party yesterday by wandering around the yard adding seed to the various feeders, filling a container with peanuts, adding the fat block to its holder and then scattering further bits and pieces across the yard.

I’ve been watching them come and go all morning through the kitchen window. I’ve been cooking while watching the party – breakfast omelets, roasted swede soup, shortbread. We’re in no rush to go anywhere today; Don will eventually pop in to London to look at comic books and musical instruments, and I’m going to the Guy Fawkes bonfire night this evening, but otherwise we’re on a down day.

We’re on day 51 now, and on almost every day we’ve been away there have been things to see and do. We’ve walked for miles, eaten out for most meals, sat on planes, trains and buses, consulted maps, read guide books, taken photos, talked to locals, climbed towers, browsed galleries. It’s a great adventure and we’re loving every single second, but when you’re travelling for this long you really need some time to just sit on a couch and watch tv, read, do nothing.

We’re lucky because we’re staying with friends and can do just that. I honestly think I could sit in Tim and Ruth’s conservatory and watch the birds and squirrels all day. They’re different birds to those in Australia and we certainly don’t have squirrels, so I’m going to count it as sightseeing.

Although I don’t often spend the whole day sightseeing in my pyjamas.