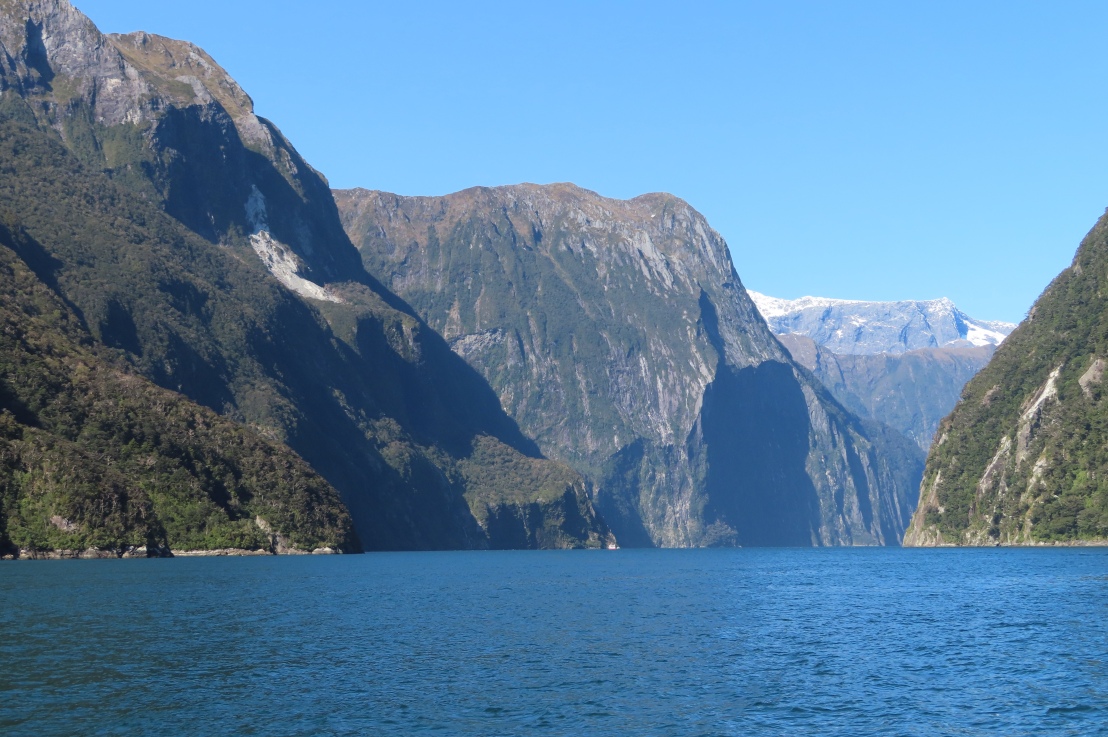 It’s our wedding anniversary and what a fabulous day we’ve had cruising Milford Sound. This is New Zealand’s most famous fjord; deep blue green water, towering mountains and cliffs and spectacular waterfalls. We had endless blue sky and sunshine and were lucky enough to see dolphins and seals. Perfect.

Our driver and tour guide, Eric, was superb. It was quite a long journey to Milford Sound, around five hours in total, and Eric’s commentary was on point. We learnt about the tectonic plates, the history of the land and lakes around Queenstown, the different sheep and cattle being farmed in the area. Volcanoes and their current risks, the elusive yet charming hermit graziers, the poisonous tutu berries, New Zealand freesias, how Shania Twain bought up land in New Zealand. The gold rush and the crazy, failed scheme to dam the lake and expose the gold.

Yes, Eric was knowledgeable, friendly, funny and informative. He told some great stories and was very entertaining. And this was some feat, because we were a tough audience.

‘Ok, nobody? That’s ok we can talk about the glacier that formed this peak.’

‘Has anybody visited Glenorchy yet?’ he asked as we drove around Lake Wakatipu.

Silence. some shaking of heads.

‘No? Ok I highly recommend a visit.’

‘Has anybody experienced a hāngī yet? Eaten meat cooked the traditional hāngī method?’

We all shook our heads, no.

‘Anybody into fishing? Fly fishing?’ he asked hopefully a little later.

‘There really is some great trout fishing around the South Island,’ he persevered and went on to regale us with his adventurous fishing exploits.

‘Does anybody play tennis?’ he asked as we drove through Te Anau, home of the annual Tennis Invitational.

‘Anybody know about Lake Taupo?’

No, no and no. By this stage he must have been thinking he’d picked up the fifteen of the most boring tourists in Queenstown.

‘Is anybody a singer?’

This really is where we should have piped up, but honestly we were way past that point by now.

Our apparent lack of hobbies or interests certainly didn’t deter Eric. Over the five hour drive to Milford Sound he told us some cracking stories, knew the history of every place we passed, the geology of the land and waterways and the names and uses of the plants and animals.

Then on the shorter journey home he let us choose songs that we sang at the top of our lungs all the way home.

Even though none of us were singers.